This costume won Most Original.

I just got home from my very first day at New York Comic Con 2013. It wasn’t exactly what I expected. What I expected to see were tons of people dress in crazy costumes. And I did and they didn’t disappoint. I saw Power Rangers, Doctor Whovians, steam punk, Transformers, Zombies, Anime characters, Jessica Rabbit, Nordic Gods, Avengers, Justice League, Villians, and things that can only come from dreams. Everyone was so nice and let me take pictures of them.

Drabbit: It’s feathers kept brushing up against my cheeks.

problem with body order and stinky people. The tips kept mentioning to put on deodorant before coming and to bring some with you. It also mentioned that Con goers should wear clean clothes and shower. I just thought, “is it really so bad that they have to put it on the website?” I found out from others today that yes, it really is that bad. I also think that the list should add lent roller to the “Items to Bring” list. Every time I wanted to sit down I had to look first because Wookies shed and so do wigs, costumes and drabbits. 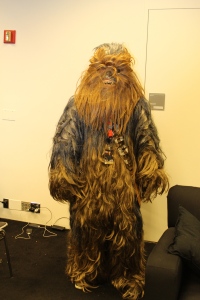 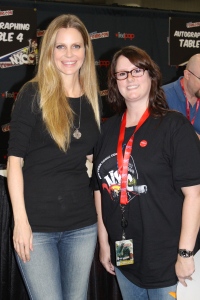 While standing in line to get autographs I saw some of the celebrities take pictures with fans while they were signing autographs. There were some lines I didn’t want to stand in so I zoomed in on the guests and took a picture. I didn’t know they didn’t want their picture taken until after I took them. I did get some pics with celebrities.

Favorite. Everybody kept yelling his name. It was hilarious.

Tomorrow I plan on doing more than waiting in lines.

I took a lot more pictures but I need to get to bed so I will make a massive picture post at the end of NYCC. But here are a few more of the celebrities I saw today. 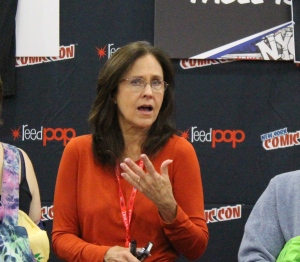 Erin Gray. I wasn’t sure if I was suppose to take her picture so I took it then ran away.

Anthony Daniels. Found out I wasn’t suppose to take one of him after I took it.

Gillian Anderson. Found out too late that I wasn’t suppose to take her picture.

Jason David Frank. The Green and White Ranger. He had tons of energy and kept people waiting in line for him energized by running and giving them high fives.