Christopher Sloan’s Bizarre Dinosaurs: Some Very Strange Creatures and Why We Think They Got That Way

published by the National Geographic Society in 2008 is a great book for kids.

Sloan is a paleontology expert and senior editor for National Geographic magazine and I noticed some of the information was written from his point of view when he was with the paleontologist who found the dinosaurs that are featured in the book. Drs James Clark and Cathy Forster also wrote a foreword for the book, they are paleontologists who not only discovered some of these dinosaurs but also teach at George Washington University.

This 32-page book comes with Table of Contents, a Foreword, Glossary, a breakdown of where some of the dinosaurs lived millions of years ago and an Index and Credits page.

The pictures are computer graphics created by artists with the help of scientists.

Each of the 11 dinosaurs get a two page spread with a computer generated picture and a picture of the fossils found of them plus information gathered and questions raised about the animals; it also comes an Expert Knowledge portion stating the name, pronunciation, year named, type of dinosaur, normal adult size, stomping ground, when it lived and what it ate. There is also a graphic of how big the dinosaur was in relation to an average sized man. 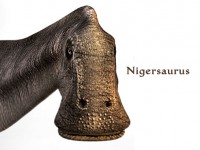 The illustrations are the main part of the book to me because I can see what the dinosaur probably looked like back then. The writing is simple and chocked full of information for kids to learn and questions the scientists couldn’t answer.

I think my favorite dinosaur is the Dracorex hogwartsia, meaning “dragon king of Hogwarts”. This plant eating dinosaur had “helmetlike bony domes on their head” making it look like a dragon.

A great reference for kids to use on a school project and to learn more about the ever changing landscape of paleontology.