KidView is a new series where kids share their views and/or book reports on books they read for school or fun.

To start off this new series is Clayton. He just started middle school in the Shreveport/Bossier City area of Louisiana. He loves swimming, soccer, robotics,  playing video games, and, of course, reading.

And the best thing is today is his birthday! Happy Birthday, Clayton! 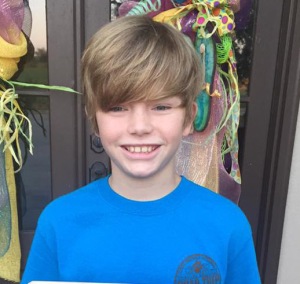 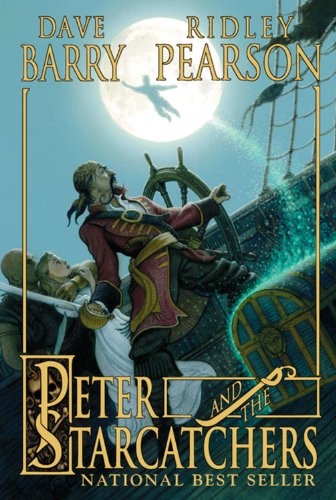 Published May 1, 2006 by Disney-Hyperion

Don’t even think of starting this book unless you’re sitting in a comfortable chair and have lots of time. A fast-paced, impossible-to-put-down adventure awaits as the young orphan Peter and his mates are dispatched to an island ruled by the evil King Zarboff. They set sail aboard the Never Land, a ship carrying a precious and mysterious trunk in its cargo hold, and the journey quickly becomes fraught with excitement and danger.
Discover richly developed characters in the sweet but sophisticated Molly, the scary but familiar Black Stache, and the fearless Peter. Treacherous battles with pirates, foreboding thunderstorms at sea, and evocative writing immerses the reader in a story that slowly and finally reveals the secrets and mysteries of the beloved Peter Pan.

PETER AND THE STARCATCHERS is a great book. It has adventure, fighting, treasure hunting, pirates, savages, and an uncharted island. What more could you ask for? The author describes the uncharted island very well, using adjectives and allowing my mind to make me feel as if I am walking through the thick jungle. I felt as if I could relate to Peter, being a boy around his age and loving adventure. I love how the authors describe the Neverland. I could see myself walking on the deck and wondering where we were headed, just as Peter did himself. I would recommend PETER AND THE STARCATCHERS to anyone who likes adventure and fighting. This was a good read.

Plot Structure
PETER AND THE STARCATCHERS was written by Dave Barry and Ridley Pearson. It was the prequel to the Peter Pan book. The story is about Peter and four orphans, who are sent from England on an old ship called the Neverland to an island named Rundoon. The King of Rundoon, Zarboff the Third, tortures and abuses people. For example, his snake ate his father.

As the boys traveled across the ocean they were served horrible food. So, they looked to Peter for help. Meanwhile, Black Stache hears of a great treasure on a ship called the Wasp. As he attacks the Wasp he realizes that he was tricked. He finds that the trunk he was searching for was on the Neverland the entire time. As Peter searches for better food, he finds a trunk with a rat literally flying. He was determined to find out about the trunk and the contents of the treasure. Then, he runs into Molly Aster who knows about the trunk and the treasure it holds. At first, she doesn’t want to tell, but later on she is forced to explain the contents due to Black Stache trying to get the treasure.

Black Stache attacked the Neverland by tricking the crew members into thinking they were the British navy, (They wore the British uniforms). Stache and his crew searched the Neverland but could not find the treasure. Meanwhile, Peter and Molly dumped the trunk into the sea and during the attack Slank threw Peter overboard for biting his arm. Molly used the starstuff from her locket to save him and fly him to an island. In the meantime, Alf and the other orphans climbed into a dory and traveled to the same island Peter and Molly were on. The Neverland crew was captured by Black Stache. They saw a coral reef and they followed it to the same island the others were located on.

Once on the island, Peter awoke and found himself on a beach. The first thing he needed to do was find water, so he searched for a water barrel. During his search he found Molly and the water barrel. They rolled the barrel to the jungle and hid it under a big batch of leaves. Searching for food, they came to a high, rocky pass. Looking down on the other side of the beach there stood Alf and the boys.

Alf started looking for water and food on the beach. After a while, Alf didn’t find anything so they were forced to go into the jungle. Soon, they lost Alf, and after walking some more they lost Tubby Ted. James, Prentiss, and Thomas set up camp and James went to look for Ted and when he didn’t find him he went back to the camp. Prentiss and Thomas were gone.

James then saw brown feet. It was the Mollusk people. They asked for James to come with them. Peter and Molly heard voices and snuck up to the top of the jungle. There, Alf and the boys were huddled up surrounded by Mollusks. Molly left to go find the trunk and Peter stepped out of hiding to help Alf and the boys. But, he got caught and the Mollusks were going to feed them to Mister Grin.

The Mollusks brought them to Mister Grin’s cage and shoved them inside. Mr. Grin was a thirty foot crocodile. They believed they were going to die, but suddenly Molly flew in using the starstuff in her locket and gave some to the others. They flew out of the cage, but Mr. Grin did too. They landed on the beach and found Amm who showed them the way to the trunk. Peter went a different way than the others and he ended up in the back of the lagoon. He saw a hurt mermaid and used starstuff from Molly’s locket to heal her. That is when he saw the trunk. When Peter got to it, he took a golden box out of it, and hid it and was knocked out by Little Richard.

Slank had the trunk and he lifted it and took it to Black Stache’s longboat. Molly, Alf, and the boys attacked Slank and Little Richard. Slank got badly injured, but he defeated them with the help of Little Richard. Slank captured Molly and made Peter give him the trunk or he threatened to kill Molly. He headed out on the longboat with Molly and the trunk. Peter flew over when Slank wasn’t looking and touched Molly’s hand with starstuff.

Then, the Starcatchers appeared along with Molly’s father, Leonard Aster. Peter showed them where the box was and they retrieved it and put the box on their longboat. After that, the Mollusks appeared. They wanted the starstuff to protect the island so they captured everyone and started to take them to their camp. Meanwhile, Black Stache saw the whole thing. He attacked Peter, but Peter dodged the blow and he hit the Mollusk leader. No one would attack because Black Stache threatened to kill the Mollusk leader.

They climbed into the longboat and sat sail for their ship. Peter attacked Black Stache and cut off his arm and then Mister Grin appeared and chased after Black Stache. Molly’s dad was taking everyone back to England, but Peter wouldn’t leave. So, the orphan boys stayed too. After Molly and the Starcatchers left, Peter saw a sign that said, “Neverland”. So, he decided to name the island Neverland.

Character’s Physical Traits
PETER AND THE STARCATCHERS has many main characters. The first character mentioned in the story is a boy named Peter. He is an orphan at St. Norbert’s Lost Home for Boys. He doesn’t know is age. Peter is the leader of the lost boys because he can spit the farthest.

James, Prentiss, Thomas, and Tubby Ted are also orphans from St. Norberts. Peter is the leader of these boys. Molly Aster is the rich daughter to the new ambassador to Rundoon. She is the most important person on the Neverland due to her money and her father. Black Stache is another character who is described as having a “footlong mustache”, and has a horrible reputation as being the meanest captain of the ship the Sea Devil.

Slank, who does not like children, is the second in command of the Neverland. He is also the first officer and is described as being very mysterious. Amm is a good porpoise who talks with Molly Aster. Alf, who is a sailor on the Neverland, is the first character to experience the magic of the trunk. Then, there is Teacher. She is a beautiful mermaid with blonde hair. She is the leader of the other mermaids.

Molly is a rich Starcatcher. She is a young girl who falls in love with Peter and she is also the daughter of Leonard Aster. Slank values the starstuff and he works for King Zarboff the third. Amm is a Starcatcher and he helps Molly and Peter get to the trunk.

Alf is a sailor on the Neverland. He was the first person to feel the power of the trunk. He helps James, Prentiss, Thomas, and Tubby Ted get to an island after the Neverland crashes. Teacher is a mermaid that helps Peter get the starstuff from Slank and she can communicate with Peter through her mind. Black Stache is the captain of the feared Sea Devil. He is disgusting and mean and he tries to get the starstuff himself.

Point of View
The point of view for this story is the third person. The author follows several different characters in the story. In the beginning of the book, the author tells us that Peter is scared to leave the orphanage by stating that, “As much as Peter didn’t like where he’d been living for the past seven years, the longer this carriage ride lasted, the scarier ‘away’ sounded in his mind.” The author continues to portray this fear by describing the ship stating, “It looked to Peter like a monster, with tall spines coming out of its back. Peter did not like the idea of walking into the belly of that monster.”

The authors let us know how Molly feels when she is leaving Peter at the end of the story. “Molly buried her face in her hands, muffling a sob.” She was sad to leave Peter. This shows Molly’s personal thoughts.

Setting
The story first takes place in a carriage where the boys were leaving the St. Norbert’s Orphanage in England. The orphans were then taken to a ship called the Neverland.   After the children leave the orphanage, the three ships that evolved in the story are the Neverland, the Wasp, and the Sea Devil. The story goes back and forth on these ships until a storm came and the characters ended up on an uncharted island.

Theme
The theme of the story is bravery and friendship. In the beginning of the story it describes Peter as feeling scared and unsure of his surroundings. Peter shows that he is brave by always looking out for the orphan boys. As a boy, he fought Black Stache, Slank, and Mr. Grin which took an extreme amount of courage. Peter proved himself to be a great friend. He helped the orphan boys find better food and helped them escape from Mr. Grin and Peter refused to leave his friends behind with the Mollusk savages when Molly wanted to go find the trunk. Peter showed great friendship and bravery throughout the story.